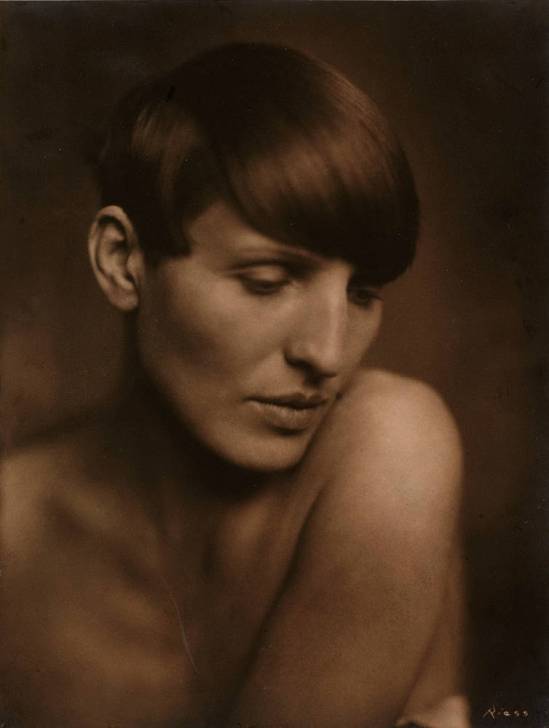 Riess was born in Czarnikau in the Prussian Province of Posen where her Jewish parents were shopkeepers. At the end of the 1890s, the family moved to Berlin where she first studied sculpture under Hugo Lederer (c. 1907) and later photography at the Berlin « Photographischen Lehranstalt », receiving her diploma in the summer of 1915.

In 1918, she opened a business on the Kurfürstendamm in Berlin; it became one of the most popular studios in the city. Partly as a result of her marriage to the journalist Rudolf Leonhard in the early 1920s, she extended her clientele to celebrities such as playwright Walter Hasenclever, novelist Gerhart Hauptmann and actors and actresses including Tilla Durieux, Asta Nielsen and Emil Jannings. This group extended to include dancers, music-hall stars and fine artists: Anna Pavlova, Mistinguett, Lil Dagover, Renée Sintenis, Max Liebermann and Xenia Boguslawskaja. Other clients included representatives of the old aristocracy, diplomats, politicians and bankers. Boxers (and nudes thereof) were a notable group in which she specialised, including Erich Brandl, Hermann Herse, Max Schmeling, Ensor Fiermonte.

Such was her renown that she became known simply as Die Reiss. While on a trip to Italy in 1929, she was invited to photograph Benito Mussolini.

In addition, she contributed to the journals and magazines of the day including Die Dame, Berliner Illustrierte Zeitung, Der Weltspiegel, Querschnit and Koralle.

Her success in Berlin was however short-lived. In 1932, after falling in love with Pierre de Margerie, the elderly French ambassador in Berlin in 1922-31, she moved to Paris with him, and he died in 1942. She disappeared from the public eye during the Occupation. Even the date of her death cannot be clearly established and her place of burial remains unknown.

"Renée Sintenis was a German sculptor known for her small sculptures of athletes and young animals. Her works showcased an interest in the poetics of movement and form, rather than anatomical perfection or detail. “My models are a perception, not an idea,” Sintenis said of her subject matter. Along with her sculptures, the artist also created etchings for book illustrations, including Sappho’s Daphnis and Chloe. Born on March 20, 1888 in Glatz, Germany (today Klodzko, Poland) she studied at the Berlin School for the Decorative and Applied Arts, despite her parent’s disapproval. In 1917, she married the painter and writer Emil Rudolf Weiss, right at the start of her burgeoning career.

Sintenis was one of the few women of her time to become a professor at the Prussian Academy, an honor she was stripped of by the Nazi regime in 1934. Managing to survive through the Nazi regime and World War II bombings, she was reinstated as a teacher in 1947 at the Hoschule der Künste. The artist died after a prolonged illness on April 22, 1965 in Berlin, Germany. Today, her works are included in the collections of the Art Institute of Chicago, The Museum of Modern Art in New York, the National Gallery of Art in Washington, D.C., and the Los Angeles County Museum of Art."